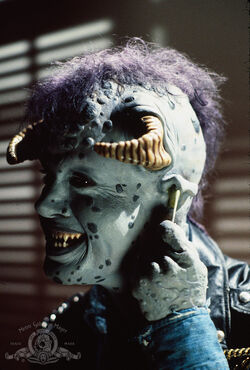 Maurice is the monster that befriended Brian Stevenson and helped end the tyranny of Boy. He's Brian's age.

He first starts out very stubborn and careless, but clearly takes a particular interest in Brian after Brian tries to capture him. This starts the beginning of their friendship. He has quite a variety of abilities, such as disguising himself as his clothes, so other humans don't recognize him as a monster. He has shown the ability to pop his eyes and, which means he could most likely distort other features of his body, but it isn't confirmed.

He acts in a hyperactive manner. He often spasms out, flails his arms, stutters, hops around, and just moves constantly.

When he gets upset, a strange little monstrous creature pops out of his head and makes kazoo like sounds. 10/10 best friend.

Retrieved from "https://littlemonsters.fandom.com/wiki/Maurice?oldid=3978"
Community content is available under CC-BY-SA unless otherwise noted.